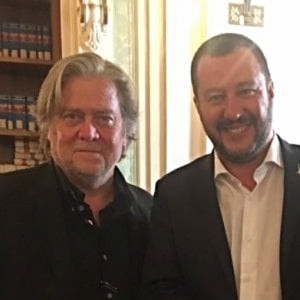 Mischaël Modrikamen: I was supporting Trump from the beginning with videos which had some success in the US… After Trump’s elections, I sent a memo to the transition team, saying “ok we’ve got the Brexit, we’ve got your elections, now if this populist uprising is to become global we have to liaise it all together”. Nothing happened at that time until Nigel Farage which, as a friend, called me, it was June 2018, saying Bannon went to Europe, I mentioned “The movement”, he said we should meet, so we lunched with Bannon in London in July, and it was a match in terms of ideas and personalities. We wanted to liaise between the populists, this was the main objective.

Tony Connelly, RTÉ Europe editor: Steve Bannon was the mastermind of Donald Trump’s successful presidential campaign. He is seen embodying a populist, anti-immigrant far right insurgent narrative. When does it fit in the Europe of the 21-st century?

You have basically a globalist approach “ok we are all just interchangeable human beings”. We can put people from everywhere, put them together, it’ll work. We believe, as sovereignists, that in order to have vibrant democracy and to have a say on your future, you need people with shared values, which means you need states, you need borders, and so on. This doesn’t mean that people coming from outside cannot become citizens, of course; but you have to first integrate them into this value system. And Europe is one of the battlefields there were many last year and there would be many next year.

But this is a battlefield for what reason? What are the issues that you see are driving populist movement in Europe?

Everybody meaning who exactly?

Even pro-Europeans accept idea that Europe as it stands today is dysfunctional.

The engine of the European system is the Commission, where these people basically are chosen, they are not elected, and they are not accountable. I cannot vote on Juncker, on Mogherini, and so on. They have been appointed without my consent and…

Ultimately it won’t be for the citizens to choose them, ok? As sovereignists we say we have to go back to more competence, more freedom for the National States.

What is yours and “The movement” ultimate objective? Is it for the European Union to fall apart?

The aim of “The movement” is not European. It is worldwide. People from South Africa, for Asia, from America, from Europe of course, from Israel, from the Arab states… We don’t only focus on Europe. But if you ask me about Europe, some would like to have it totally disappear, Nigel Farage as the leader of the Brexit movement, wants to get rid the EU. We, as the Europeans — Belgium is at the heart of Europe — I don’t say that European structures have to disappear.

Is that because Brexit has been so problematic, there has been such a disarray, has it not changed opinions across the Europe?

You mean House of Commons?

Yes, House of Commons and those who…

Yes… didn’t deliver the choice of the citizens of the UK. That’s the main problem. So we’ll see, I hope it’ll be delivered, and I think it’ll be a good result for the UK, ultimately…

Would it be “hard” Brexit, do you think? Like a “no deal” Brexit?

Personally, taking into consideration all discussions that took place, I’d push for a “hard Brexit”, ultimately I think we’ll end there. In the meantime, you see a reaction from the citizens toward the political class, Farage was forced to rebuild the party and in a month it is leading in the polls with expectation to get more votes that Conservatives and Labour together. It is obvious that large majority of Citizens want restrictions on migration, in particular from non-EU countries. And if you look at the position of the Commissioners, they basically say “we need migration, we need to keep borders open”

They said they have an obligation under international Law to accept refugees who are fleeing war. What they want to do is to make sure that the refugees that did come in whether they are genuine refugees or economic migrants that they would be shared throughout the EU rather than have Italy and Greece take the huge burden of dealing with that issue

There is a lot of confusion — migrants, refugees and so on. We have some obligations vis-a-vis refugees, we don’t have as much obligation toward migrants. The problem also that everybody comes pretending to be refugees.

Sure, the Commission knows that and of course you can only send people back o the countries when you have an agreement… Things are complex, it is not that simple

I didn’t say it wasn’t complex. But we, the populist, push for a long time towards Australian model. We don’t let anybody get in, either by boats or by crossing the borders, and if you do that you lose all your rights, but we need to establish hot spots, and clear the people that would be allowed to get in, and this would dissuade the migrants who are trying to cross, and we’ll avoid a lot of casualties.

And the EU proposed that, and the Commission has worked on these disembarkation centers in North Africa. All of these things EU is looking at

It wasn’t enforced. And the problem also that the obligation to accept migrants comes from European Court of Human Rights, which decided in 2013…

European Court of Human Rights is not a EU institution

Yes but they ultimately submitted to this decision, we have to accept the migrants, we can’t push boats back into the sea… I think this was big mistake.

That’s against international Law. You can’t refuse them, you can’t push boats into the sea

No, this was a totally new interpretation. We have Court of Human Rights, and we have Convention of Human Rights, which in itself of course is a good instrument. But we have seen through the years some kind of activism from some of the Judges, who push it more and more, far, far, from the initial design, of these who wrote this Agreement. They are not the Judges who went though the system, first barristers, then appointed, had to climb the ladder… They are basically professors of Human Rights and so on, very often with little experience.

But the are appointed by members of the Council of Europe, by their Governments

No doubt about this. I am just talking about their background and what kind of people are sent there.

Because the problem facing the eurosceptics is that they are often on different pages when it comes to issues like Russia, issues like protectionism, migration, all of these thing, so how effective do you think new eurosceptic block could be in European Parliament?

We focus on a few tenets. Sovereignty, borders, fight against radical Islam, migration. On these I believe we, the Populists, can agree. If we agree, for example, that EU competencies should be reduced and that more power should be given back to the States, that’s what we agree on, and from that point we all would conduct policies that we will choose, that our electors will mandate.

It is built into EU treaties, the concept of subsidiarity, so where the powers should go back to the Nation States, they do, and EU is generally committed to the policies that have cross-border nature, that deal with issues which are not simply solvable by Member States on their own, like climate change, issues of globalization, trade, what’s the problem with that?

First of all, it’s the principle; if you look at the realities, it is today accepted that approximately 80% of national regulations derive from the EU. You can this “subsidiarity”, in fact, I think it is the opposite.

80% is the statistics that was attributed to the House of Lords, in fact when they looked at it, it was only 12-13%

I wouldn’t agree with this. We also made these studies. There is a consensus that a very important part comes from EU influence. So, it is a nice principle but if you look at number of directives and regulations, ultimately, it is organizing all the life of European States. Citizens need a say on their future.

They have a say through who they elect, ministers that are sent to Brussels are elected, MEPs ate elected

Ultimately if you look how it works, the process is diluted, and many national governments see that it is decided at EU level, through the complex mechanism made of a lot of countries intervening, made of lobbying, made of European Parliament, and this is very far…

This will not work any other way unless you have a consensus, and structures, and rules, different countries having different weight because of their population sizes, etc.

I agree that in EU this is a way it is functioning, but this doesn’t mean it is democratic, it is alienating ordinary citizens.

I wouldn’t deny that Russians tried to interfere, but where I totally disagree with comments of some of the media and the elites, is the Russians had nothing to do with the victory of Trump or with Brexit.

There have been investigations in the Unites States which would completely contradict that, there were clear efforts by Russians to undermine and create divisive narratives within the groups in America

You’ve spoken about your preference, if necessary, for a “hard Brexit” or “no deal” Brexit. What concern would you extend to Ireland and Irish peace process which would be very badly damaged, according to he most people, but a “hard Brexit”?

I think ultimately we’ll find ways to avoid hard borders. What I see from the outside is that what you want to avoid of course is the division, physical borders between the people. What the EU and customs system doesn’t want is products flooding without control, and…

I am sure Belgian and French farmers wouldn’t want that, either

I was told that certainly for a lot of products there are many ways to find practical solutions for these problems.