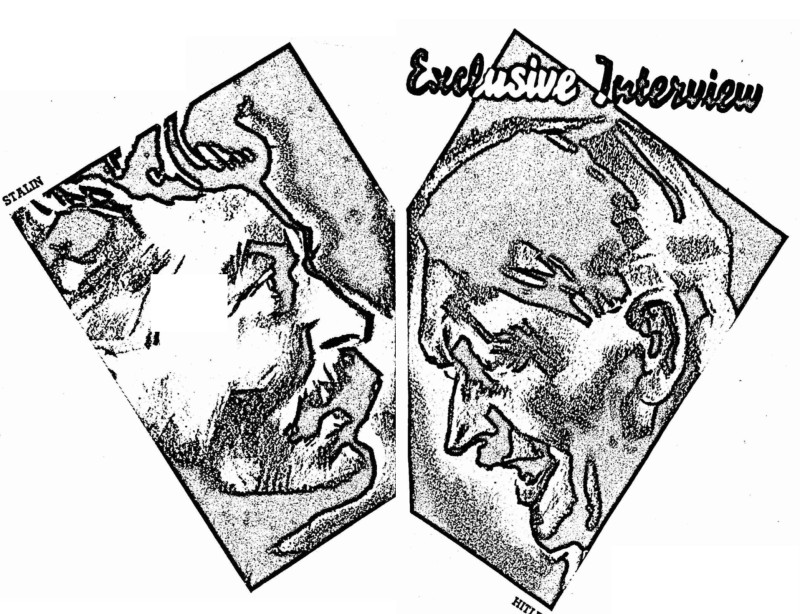 Stalin chuckled. He had just handed me a Reuters news dispatch—one of a flood of such dispatches—in which the Nazi government sought to convince the world that its hesitation about repeating its Austrian feat in Czechoslovakia was due not to fear of any one but to Hitler’s wisdom.

“Do you believe that?” he asked.

“Well, you are right not to believe it,” he agreed. Then he chuckled again.

I glanced once more at the dispatch. The final sentence read: “Europe owed it solely to the Fuehrer, with his splendid nerve and his boundless love of peace, that this dangerous game did not result in a catastrophe.”

This time I chuckled, too. I had just come from Prague—where I had gone to study the Czech situation for Liberty—and I knew first hand just how ridiculous this explanation of Hitler’s background really was.

“What Hitler was really afraid of,” continued the Man of the Kremlin, “was that Russia would move. He was thinking only of himself, not of the peace of Europe”

That that this was true no informed person could doubt.

The Czechoslovakian crisis is a thing of the Past, but the lesson to be learned from it is definitely of the’ present and the future: the peace of Europe, and perhaps of the world, was maintained solely because a direct hint was given from Moscow to the Czechoslovakian government to fear no one and to call its troops to the colors, because, no matter how much Hitler might boast, Germany could not afford to lose its prestige by rushing into a war which it would be by no mean sure to win. For Stalin, the best informed man in Europe, knew that the German army was not yet in a condition which would allow it to resist a well equipped enemy.

“Hitler,” said Stalin, as if in answer to my question, " is not such an ass as some people think. He would like nothing better than a close alliance with Russia."

An alliance between Communism and Fascism! A Moscow-Berlin axis! Here was news indeed. Yet who could doubt that a friendly understanding with the man in front of me was today the main objective of every European government?

He stopped for a few moments; then went on:

“I love Russia, and no one knows what I suffer when I hear it slandered and maligned. Peter the Great also loved it, and made out of it an immense empire. Everybody admits this today, but everybody seems to have forgotten how much blood he shed before he succeeded in his endeavor. Nothing great can be done without blood flowing, because blood is the only thing which can cement the fragments of a tottering edifice. And it is not so long ago that the entire structure of Russia was tottering and about to fall. It had to be saved. I hope I saved it, but I don’t know… I wish I knew.”

As he spoke, he rose from his seat, a magnificent, colossal figure, a man profoundly convinced of the justice of his cause, determined to restore to his country the place from which she had been banished.

"Napoleon the Third once said, ’ The Empire is peace,’ " he went on. “I say the same thing, but more truthfully. Soviet Russia means peace, wants peace, will and can enforce peace. Soviet Russia is not aggressive, it hates aggression, but it can meet it and defeat it. It will remain faithful to its treaties, without immediately resorting to war in order to enforce them.”

Watching this man—so strong, so poised—I realized more clearly than I ever had before that Soviet Russia holds the key to the entire European situation. She holds it because she is the great unknown; because, so far, no one has been able to discover the real strength of her army or the intentions of its leaders.

Stalin remains the man of mystery, a sort of Old Man of the Mountain.

These are the questions which one finds on the lips of almost every European politician one talks with.

Not so long ago the annual maneuvers of the Red Army were countermanded without any reason being given for this unexpected decision. An English publication went so far as to say that it was a proof that Russia as a military force had ceased to exist. Stalin was asked to contradict this statement, but he merely smiled.

“Why contradict it?” he asked. “It serves our purpose. We do not want our enemies to know whether we are strong or weak; they will discover it themselves if they ever dare attack us.”

This is the mystery which weighs on the minds of politicians all over Europe and overshadows every decision they find themselves called upon to make.

How can Hitler attempt to sweep Czechoslovakia off the map as he swept Austria off, if he is not sure that Russia won’t attack him from the rear? How can France think of fighting Hitler, if it has reasons to dread Stalin with his Red troops rushing to the Fuehrer’s rescue? How can England afford to become entangled in a quarrel which is not her own, if her hopes of being friendly with the new Russia might be dashed to the ground by any untoward move she might make?

Of course Hitler would like nothing better than a close alliance with Stalin. And, in spite of Stalin’s cryptic remark about not needing alliances, he may get one. Lately the Fuehrer has turned all his diplomatic attention upon Russia, and is now trying to negotiate an accord with the Soviet government, which Stalin has really wanted to complete a long time and has simply awaited a favorable moment to do so.

This does not mean that Hitler loves Stalin, or that Stalin sympathizes with Hitler, but both men seem to understand that together they might might achieve start on the road toward the peace which they both need.

Russia knows, and I know, that what she needs most at the present day is reconstruction—internal reconstruction," said Stalin. "Within an incredibly short time, as you will see for yourself, Russia will again be prosperous and rank among the most industrially successful nations in the world.

“People call me a monster, but this does not trouble me. Napoleon was called a monster. So was our own Peter. So were all the men who made something out of nothing. I have always thought of my country, even during the dark days when I was an exile in Siberia, or a prisoner in a dungeon. I still always think of her, and because I do, I shall see to it that, while ready to fight—which I can safely say no other country in Europe is at present—she does not get into any fight but uses her power to maintain peace everywhere.”

Stalin paused as if to let this momentous statement sink in; then he added : “That is a fact of which I am proud, especially when I remember the negligible quantity Russia was but a short time ago, and how the tables have been turned to Russia’s advantage.”

My thoughts flew back at once to the recent situation in Czechoslovakia, and the Dictator’s must have, too, for he went on to speak of Hitler in much plainer terms than the head of one government usually employs in speaking of the head of another.

“Surely this means something,” he said. " Hitler was all ready to march into Czechoslovakia, his advanced posts had reached its frontiers, when he was made to feel that one step farther might mean Russian soldiers facing German ones, and you saw what happened. Yet no threat was uttered, no menace was used. The existence of Russia simply became to him a serious fact to be taken into serious consideration. He knows that a conflict with us might mean his own ruin."

“If this is so,” I asked," why did not Soviet Russia use the same tactics when poor Austria was invaded?"

“Because, for one thing, there was no treaty or understanding between Austria and Soviet Russia ; and, for another, Russia did so much in the past for Austria and was rewarded with such dire ingratitude, it would have been folly to rush to her rescue.”

“Undoubtedly,” was his unhesitating reply. “And Soviet Russia is strong enough to prevent war from breaking out again to disturb humanity.”

Stalin made his last statement with a justifiable pride. Thanks to him, Russia has once more become a determining factor in European politics, such as it was during the reign of Alexander III. Thanks to him, the old Realm of the Ruriks is again coming into its own, because Russia now, such as it has become, can be declared outside the pale of civilization, together with those who rule it, but it can no longer be ignored, and its voice must be taken into account when questions of international politics arise.

Fortunately Stalin realizes extremely well that Russia and he himself have everything to lose if they become entangled in European complications. They will never allow themselves to get embroiled in other people’s quarrels or dissensions.

Russia thinks only of herself, and Stalin thinks only of Russia. So today he stands the best defender the world has against the criminality of another war which would sweep away the last remnants of our seemingly doomed civilization. One question still troubled me.

“But what do you make of Spain and China? Doesn’t their fate disturb humanity?”

“This does not concern Soviet Russia,” was the astounding reply. "Only Russia concerns Russia. What goes on elsewhere doesn’t interest her beyond a certain point. Soviet Russia won’t fight for the advantage of its neighbors and competitors. But it will fight tooth and nail whenever its interests are threatened.

“Russia is working at its own reconstruction. Russia is on the road to become the greatest nation in the world, and so long as I am responsible for its welfare, I will not allow it to deviate from that road. It is not a road that leads to war, in spite of the fact that war holds no terror for Russia.”

Once more Stalin paused as if to emphasize his own awareness of the significance of his words.

“Nor for her rulers,” he added grimly.

Then, quite unexpectedly, he chuckled again.